These Casa de Colmo are worth a visit!

In Santana, the colorful, unusual houses are one of Madeira's attractions. In the small park next to the town hall, the municipality of Santana has rebuilt some of the small houses and promotes their preservation. About 100 of these, also called beehive sheds, are still around Santana. The Casa de Colmo were until a few decades ago, the traditional house of farmers in many island towns. The small gabled, thatched roofs reached down to the ground. The colorfully painted front of the Casas is made of wood. 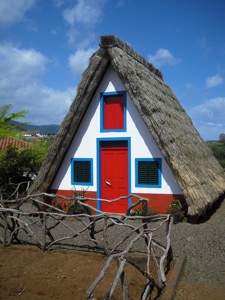 The Casa de Colmo were born from the distress and remoteness of the Madeirans on the north coast. Wood was in abundance - straw was also there enough after the threshing. The interior was more than modest, the real life like cooking took place outside. Today the tourism center is housed in one of the cottages.