If you want to get to know Madeira, you will always come across the unique customs and traditions of the islanders. Everywhere you will meet hospitable Madeirans who will share their culture and their customs.

This Madeiran culture is alive and expresses in a variety of ways, e.g. in the embroidery and tapestries, in the basketwork or in the famous folklore with its colorful costumes. The "Brinquinho" (a kind of bells tree) accompanies a group of folk dancers and sets the rhythm. The dancers wear colorful costumes and dance in a circle. The dance itself has a solid sequence of steps. The folk dance groups today perform Madeira's songs and dances in their original form, thus preserving the folk heritage.

The "Brinquino" itself is a stick to which dolls are attached. These dolls wear costumes like the dancers and are decorated with colorful velvet ribbons. The wearer moves the instrument up and down so that the dancers dance together with the puppets according to the rhythm of the castanets and bells.

The folk dance is represented everywhere in Madeira. At their folk festivals, which are held regularly throughout the country, the farmers dance the "Brinco". Everyone can participate, whether with or without costume, he only has to join the circle of dancers and singers.

Fado in Portuguese means something like "Destiny / Divine Will". The works are usually about unhappy love, past times or the yearning for better times, social ills and especially of the Saudade, which one can translate with Weltschmerz, sadness, longing or gentle melancholy. He expresses the entire emotional life, which is to connect the Portuguese together. Originally developed from the songs of Portuguese sailors, Fado first appeared only in the disreputable pubs of Lisbon's slums.

The singer or singer is accompanied by a classical and a Portuguese guitar. The instruments are traditionally played by men. 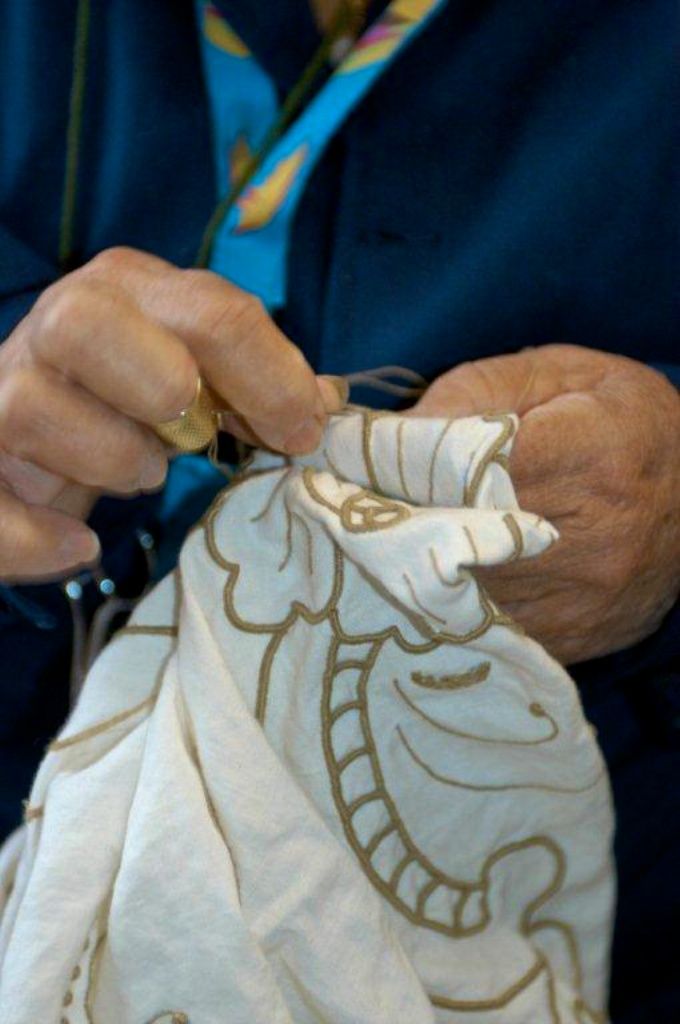 Madeira is famous for its elaborate embroidery. Historically, it is not certain when exactly the art of embroidery started in Madeira. The oldest pieces date from the 19th century and show strong English influence. The women mostly work at home and are scattered all over the island. By the daughter of an English merchant from Funchal, Misses Phelps, around 1860 the embroidery became an independent and Madeira typical art. The embroideries are reminiscent of traditional lacework, are richly decorated and very decorative. The oldest embroidery of Madeira is characterized by flower garlands, hole embroidery, chain stitch, rosettes and stars. On tablecloths, scarves, blouses, dresses, handkerchiefs, deco fabrics and children's dresses, the handcrafted works of art can be purchased today.

Embroidered pictures were just a folkloric tradition in the beginning. However, thanks to the dedication of the German Kiekeben family, this changed into a successful craft. With infinite patience and many, many embroiderers the Gobelins were created on Madeira. In 1938, the first Gobelin Atelier was opened on the basis of an embroidery factory. The tapestry rugs were soon sought after and so embroidery took a significant place in the economic life of the island.

The tapestry is a picture painted in "wool". The sticker is the painter who does not paint his picture with a paintbrush, he embroiders it. He places color spot next to color point until it shows landscapes, flowers or faces on fabric. These extremely robust handicrafts are handed down from generation to generation, leaving a traditional art on Madeira. 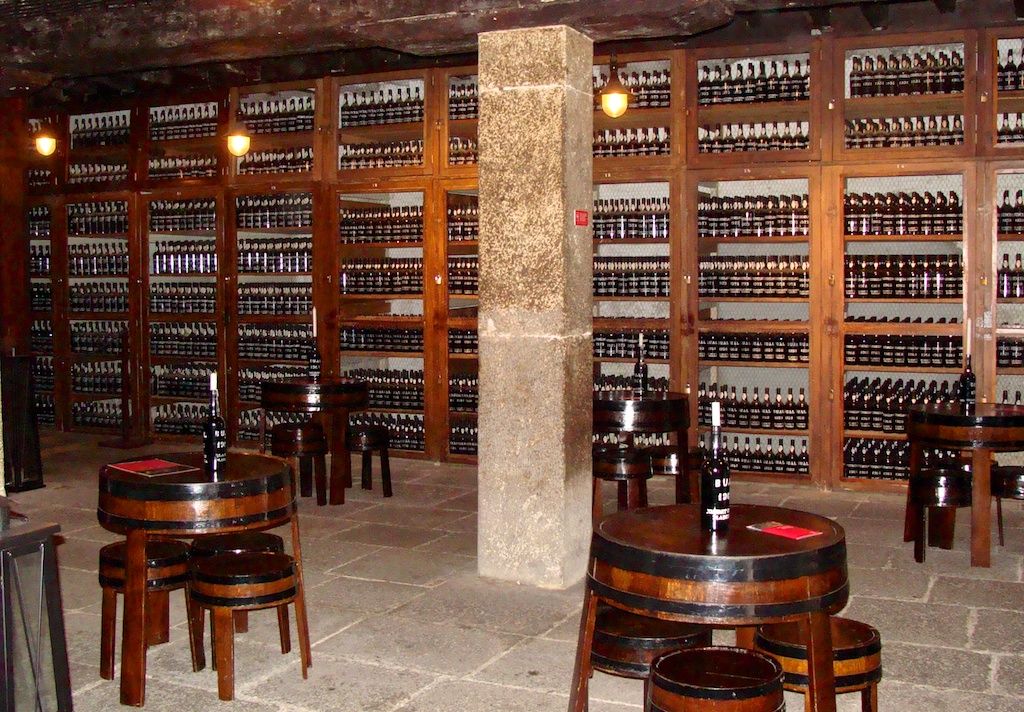 Madeira wine is a protected name for the south wine, specially made in Madeira. This liqueur wine is not only absolutely unique, but also associated with many traditional works. Its alcohol content is between 17 and 20%, depending on the variety. The wine is enriched with brandy to prevent fermentation. This increases the alcohol content because some of the sugar in the grape remains. The traditional aging process was the "Vinho da Roda Method". The wine was shipped to India and back again. Today, the "Canteiro method" is used more. The barrels are kept at a relatively high temperature, which also produces an aromatic and long-lasting wine. He easily sticks to 100 years without sacrificing quality. Rather the opposite is true. You just have to try it!

It starts every year in the week after Easter. Then the work races at full speed day and night for four weeks in the traditional sugar cane factory. Fresh honey cake, the "Bolo de Mel", Poncha, the national drink of Madeira, cane brandy "Aquardente de Cana" and sugar cane syrup "Mel de Cana" are the special delicacies of Madeira made from sugar cane. The harvest must be processed within a few hours, otherwise the sugar cane will dry out. Sugarcane once brought Madeira to prosperity.

Madeira's most delicious "K.o. drop" is called Poncha and is a Madeira specialty made from lemon, honey and sugar cane brandy. With the Pimmelchen, "Caralhinho", that's the name of the little whorl, the mixture is whisked, so you do not taste the alcohol like that. A mixture that supposedly forces everyone to their knees.

The craftsmen usually produce their goods at home. The wickerwork is often piled up in front of the doors of the houses before being picked up. The wicker work of willow branches secures the livelihood of many families and is one of Madeira's most important export goods. Each operation is still carried out by hand, as it was 100 years ago, even peeling the willows. The willow rods are cut in the north of Madeira, boiled or soaked cold and there already peeled. These are then passed on to the basket makers in Camacha, who use them to make baskets and furniture.

If the willow bundles are soaked in boiling water, they get their brownish hue and are easier to work with.

The willow branches remain white when they are bundled after harvesting, placed in the cold brook or river water and peeled after drying. These are however more stubborn and harder to process. 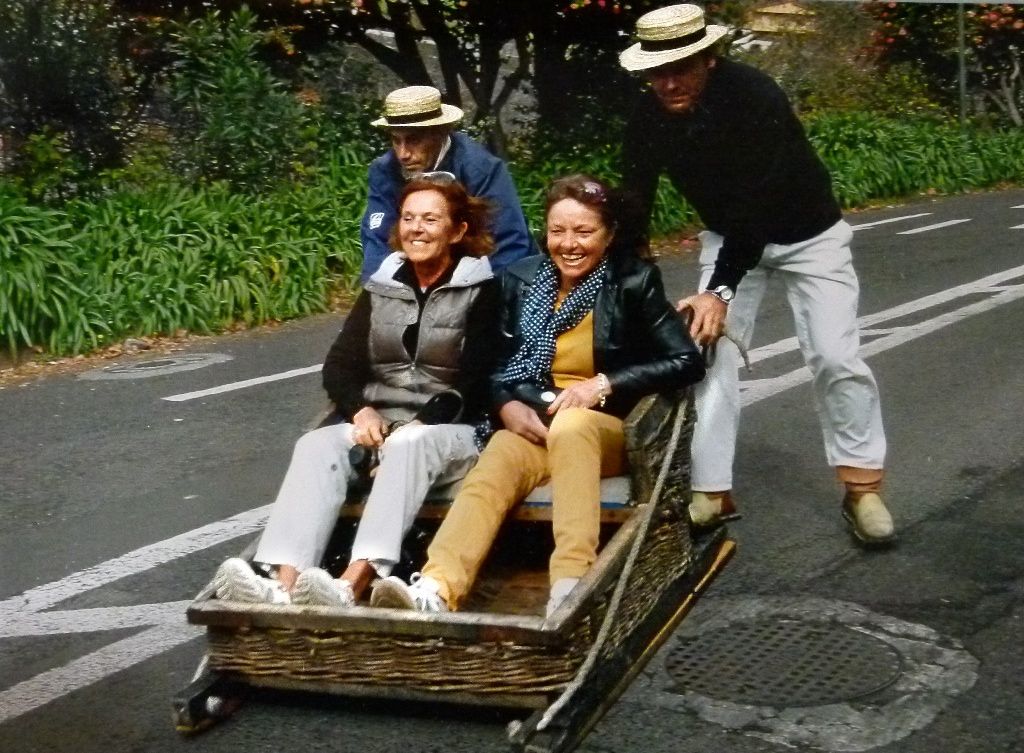 The first basket carriages "Carros de Cesto" were introduced as a means of transport for the inhabitants of Montes and thus the first public transport in Madeira. A British businessman in Monte, who was made inventive by the misery, or rather his tired legs, found the way down to Funchal to his trading office on the narrow, steep cobbled paths extremely tediously. At that time, there were no roads on Madeira, and the roads were unsuitable for horses and carriages because of their almost crushing narrowness and the steep slope.

Old people, the sick and wealthy tourists, then called travelers, were carried down hammocks or palaces from Monte to the city. The skid steer, launched and steered by two men, was a great relief as a means of transport, though the ride on the paved paths took much longer than it did today on slippery asphalt. 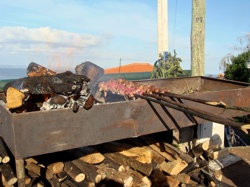